Please see the below email from the Malone family:

The Malone family – including Michael – decided to come home today. His chest tube was removed yesterday, and he tolerated the procedure well enough to be given the OK to leave the hospital. His catheter was also removed, so Michael is going home with oxygen and his port accessed so that hospice can administer IV medication.

He still has fluid in his left lung, but given the circumstances, inserting a new tube has its own set of risks and would have only lengthened his stay, without any definitive promise of improvement. The remainder of his care will now be through hospice.

Michael did have one uplifting moment today. To better understand the moment, here is an excerpt from a speech that Mike Malone gave to their church and to the Baylor School of Nursing:

One of Michael’s favorite things is the reality TV show The Biggest Loser. At first, we thought it was about the teams and the competition. The teams are designated by colors, which Michael loves, and they have intense competitions and challenges, which he enjoys immensely. And the trainers are his heroes. But over time, we have come to believe it is because Michael feels like he and the contestants are kindred spirits. The contestants on the show are morbidly overweight when they arrive. They are in fact sick. Yet by agreeing to be on the show, they have decided they want to get better. They take charge of their own destinies. They rely on each other. They form communities. The contestants are on a journey to get better. I think, as a cancer patient, Michael understands their pain and their suffering. Like him, they are grinding it out. He doesn’t want them to relapse. He wants their weight, like his cancer, to melt away.

And from Alison…
So Michael’s initial Make A Wish was to fly to The Biggest Loser Ranch and work out with the trainers and the contestants, and especially to meet his personal favorite, Bob Harper. Make A Wish worked very hard to try to make this happen for Michael, but there simply wasn’t time. So today, Bob Harper surprised Michael with a phone call right before he left the hospital. For those of us that were there, I can tell you that it was absolutely magical. And as his mother, after several nights in a row sleeping next to my son and watching him in excruciating pain and discomfort, it was uplifting to see his face when he heard Bob’s voice. Michael has very few giggles left, and I haven’t seen him smile since Wednesday. So if you’re reading this, thank you, Bob. You made Michael very happy today. We join Michael in his admiration for you – a trainer, a motivator, a fighter, a healer. Keep fighting the good fight, and if your contestants ever get weary and want to give up, tell them about Michael.

Thank you to everyone for your continued prayers and support. There are no words to describe our gratitude.

God bless you all,

Please feel free to contact me with any questions. 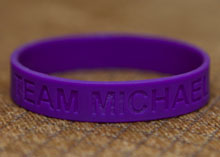